Harvester is the first solo show at the gallery by Dutch artist Frido Evers (1980, Mainleus, Germany; lives and works in Oslo). It is the first of a series of new extensive installations following Sparrow Bones (2015).

Upon entering the gallery (leaving the urban reality of the streets of Rotterdam) one enters another world: a sacred, magical realm made of light and colour, of stone and metal. The initial experience is one of awe, but stepping into the installation a creeping sense of claustrophobia gets hold: one must squeeze past the tree-shaped sculpture that guards the entrance to the structure of cages that snakes through the gallery space.

Evers has transformed the gallery into his own universe: a modular system of six connected cages forces the visitor to engage in a cosmic journey set out by the artist. Light is used to its theatrical effect, reminiscent of the effect of stained glass windows in churches, while also suggesting a VR computer game world. In games, as well as in many of the myths and legends of the world, the defining notion is the quest. The protagonist (hero, initiate) has to proceed through certain steps (phases, levels, rituals) to reach whatever lies at the end. Harvester structurally replicates this, yet the ‘quest’ here is a more tranquil and reflective experience.

Evers is interested in (the psychology behind) systems of belief. he questions human “hunger for explaining our existence”. He is marveled by the effort humans make to create (spiritual, religious) realities to satisfy their hunger. Yet for Evers, the why of the hunger remains an open question. Rather than analysing, he aims to address his questions through experience. The visitor experiences a cosmic-ritualistic Werdegang through the installation, while the artist experiences some of the tremendous efforts that goes into creating a fictional reality that seduces the visitor–an effort that requires some sort of belief.

While the residual space surrounding the cages mimics a garden, the cages themselves host sculptures that can be seen as models for the universe, like shrines, or – in one case – a temple floor with a bronze branch that could be a rudimentary, ritual staff, left on the floor after a ritual.

The title ‘Harvester’ refers to the ‘harvesting of souls’ at the end of a spiritual cycle. Yet the end of the journey is purposefully anticlimactic–‘Pilar of Creation’ is the most modest of all sculptures in the installation. It marks an eternal endpoint, as void of use and meaning as a parking pole on a roundabout. In the end, rather than being ‘harvested’, wandering souls are destined to eternal cyclicism, inescapably trapped in the all-there-is, the universe. 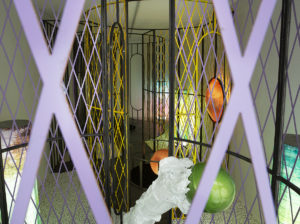 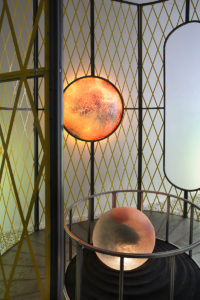 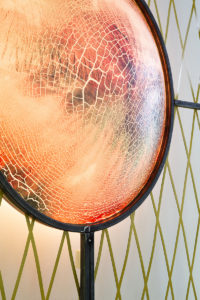 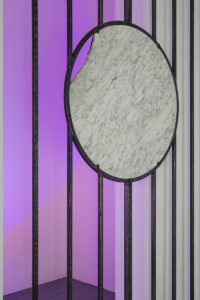 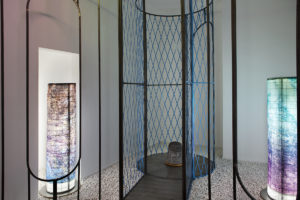