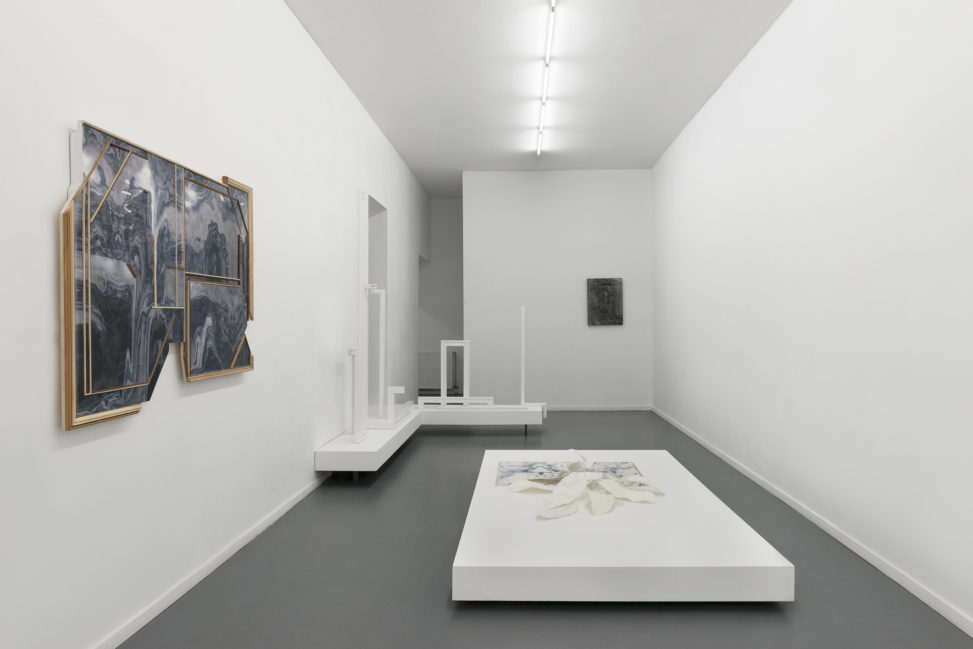 The Echo of a Shutter Sound

The way smartphones still make the overly intense click sound when a picture is taken, seems to be a nostalgic remnant of a human wont or a mere decorative sound that somehow made its way from the physical space into the digital realm. The shutter sound has become totally obsolete: it used to be an outcome of an actual closure of the shutter, in order to capture a picture on the film. Nowadays, through digital means, there is no film, nor a shutter, however the sound is still present – without any practical relevance.

The mediatic transitions that come along with technological developments have always made certain means outmoded. It is exactly this obsolescence that is created and carries an artistic potency when something has become devoid from its function. Form follows functions – was the Modernist credo. However when the function does not exist anymore, only unnecessary forms remain. And from excess arises a potential to play around, create new applications – and to become art. Especially when considering the Kantian idea of art as things which are defined by an absence from function.

In the second half of the last century technological advancement was believed to release mankind from its daily struggles. By machines taking over quotidian practicalities, people would be in the position to freely rove around the globe, focus on self-development and the exchange of ideas. In this context, Constant Nieuwenhuys created New Babylon (1959-1974) to conceptually, visually and tangibly – on a maquette-scale – show the possibilities and implications of such way of life. In a globe-spanning network of architecture, people would be able to go anywhere, anytime, and become ludic nomads. It ought to be a world of Situationist derivé in which goals were never determined, and aimless wandering was : a state of total excess: the art of everyday life. Unbound to place, in limitless space, people would take infinite strolls.

In a related line of thought Superstudio developed the Continuous Monument: An Architectural Model for Total Urbanization; and Archizoom came up with No-Stop City. Both projects used a conceptually-driven approach to research possibilities on immense geometric structures in which all objects were standardized and replaceable. Mankind who lives in open spaces, accompanied by their technological solutions, were bound to take up and cover the entire globe. At the same time, London-based architecture collective Archigram and the Japanese Metabolist made pre-fab, tailor-made, individual-based architecture that was completely replaceable. For them, a building was as temporary as its functionality. Tailored to the highest technical standards of the moment, buildings parts were replaced the moment they were no longer up-to-date. The post-war years were over, and the economy was on the rise. Consumer culture became a term and there was no limit to what could be done. Only the frontier was lurking.

This cutting edge space travel inspired architecture of Pods and Cabins later became an important scenery for futuristic feature films. Examples would be The Fifth Element, Demolition Man and Bladerunner, or more recently The Matrix, Avatar and Ghost in the Shell. Films in which the environments are largely digital, people hardly exist as a singular being and space travel is commonplace. They are technology-driven thought gymnastics in which man and machine are indistinguishably fused together.

Such commensuration of the digital and physical is present in the Hito Steyerl coined concept Circulationism. Several years ago she theorised the constant exchange between the digital and tangible world, and stated that formerly online and offline reality were seen as two completely separate worlds. Then already, it was becoming increasingly clear that both realms influence each other, interact and increasingly merge; in short, have become inseparable. The same applies to images and information. Finding the initial image – ‘the original beginning’ – is impossible. The continuous multiplications, fragmentations and adaptations that (visual) information undergoes is as beginning- as endless. They will lead their own autonomous lives in many different ways, in many different forms, in many different locations – and all simultaneously.

We have become the digital dream of cybernetic thinking. A syntheses of communications and automatic control systems in both machines and living things. Thus, everything has become as synthetic as liquid: without steady form or substance, mimicking truth and acting false, or imitating a natural presence. The practical function of our physical environment is becoming increasingly redundant, thus creates ever more possibilities for it to become artistic. In the line of this obsolescence of materiality, architectural fragments are mere decoration as our infrastructure has become totally digital. Lilian Kreutzberger already speculates on this future excess. Here, the separation between image and object has been forsaken. Pictures are solely skin, decoratively draped over remnants of buildings or plants. They can be image and object simultaneously, inside a space in which scale and form are negligible, as they could change into anything, anytime.

These speculative renderings arise from the idea that they are windows that contain a sight on a future where one can leap into, and where technomorphic malleable marble is already a possibility. It is a reality in which architecture has become obsolete and our environment is solely a bubble in the form of a screen. And on screen, everything is possible. As real boundaries and edges only exist in the physical vertigo, these works are indifferent to outmoded ideas such as impossibility or limits, and only conditioned by the ideas of incomprehensible and infinite – beyond any material realm. The background noise is an infinite echo of a shutter sound. This defines the mode we now interact with images: they are just temporarily solidified, only to be kept for a second, to then be discarded as outdated remnants of a past bygone. Move on. It is a state which only could be defined by the fact it is never steady, always in flux. Never stable nor singular – only liquid. It is a metaphor with a drop shadow, a connection with the vanity of a reciprocal stream, and an all-encompassing information-based infrastructure that is somehow still separately indicated by the term “internet”. Here, the painterly windows that Lilian Kreutzberger makes consist merely of (visual) information, and gestures that tell: existence has become an infinite scroll. 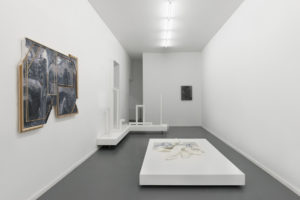 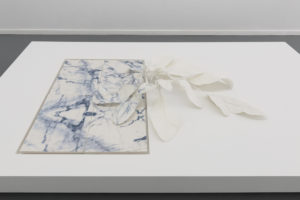 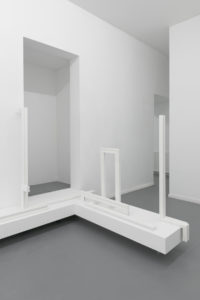 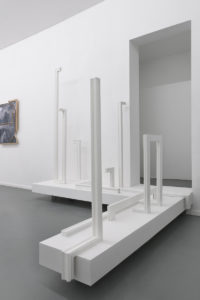 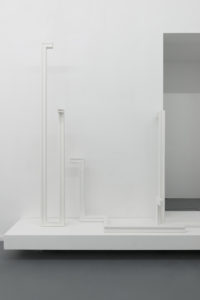 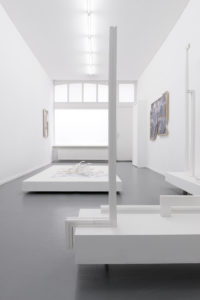