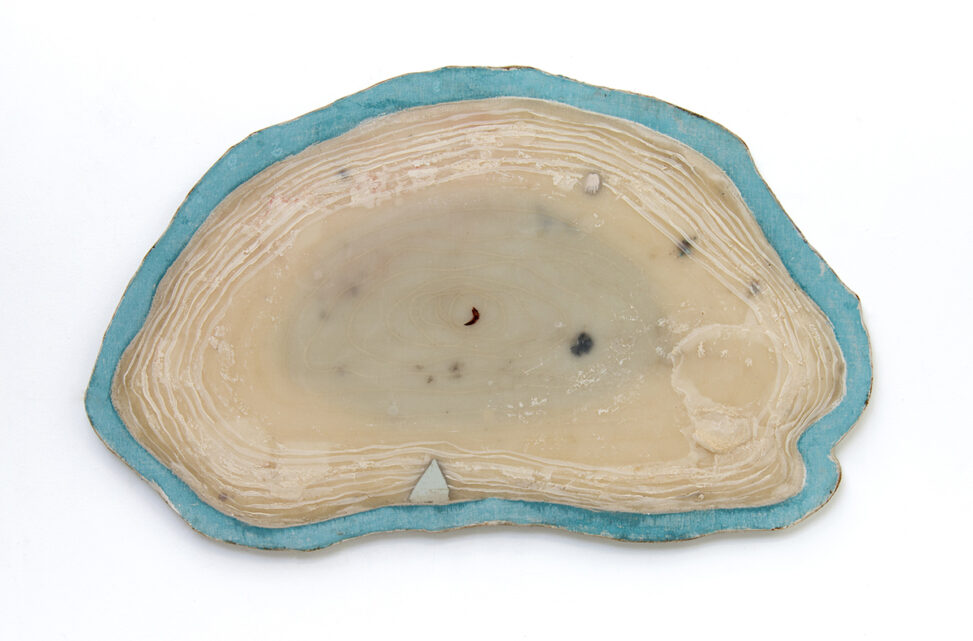 We are pleased to present ‘Holding a fish to avoid sinking’, the first solo show at the gallery by Eva Spierenburg (Lelystad, the Netherlands,1987), consisting of new object-paintings and sculptures.

In Merleau-Ponty’s phenomenology, corporeality and being embodied are prerequisites for our understanding of –and interaction with– the world. Breaking with Cartesian dualism (and with a much older, Platonic tradition that assigns primacy to the mental and spiritual), our relationship with the objects is recalibrated by this philosophy. The body handles the objects with which we shape our world, and by shaping it, we learn to understand our own being in the world (to paraphrase another phenomenologist).

For many visual artists handling materials in order to understand the world is second nature. The artist transfer not only her or his mentality but also their corporeality to the innate material. There is, as it were, a “transfer” from body to object, from living to dead thing – is it a desire to bring the object to life?

In Spierenburg’s work not only the human body, le corps propre, is seen as a body. The objects of human action – the works of art – are also data of physicality, possessing selective corporeal properties and attributes: vulnerability, materiality, and skin.

In the ‘Hidden Remains’ works in this exhibition are about the skin, and what lies beneath. The sculpted frames –each unique in its shape– can be considered the works’ bone structure. The skin –made of latex, finely woven fabric, or wax– is translucent and partly transparent, but reveals only so much. The ‘hidden remains’ leave us guessing, longing, yearning, the way we yearn to resolve the mysteries of life and death, the foundational emotive drive of religion and spirituality.

Spierenburg’s object-paintings make us deeply aware of our skin being the outer limit of our beings: the skin, the membrane, our largest organ. We can touch, feel, knead, press, stroke, and taste, but we cannot really become one with the object. Spierenburg’s expression of this existential tragedy contains great beauty.

A religious subtext can be found in the gothic or romanesque window shape of some of the works (which we associate with churches), but equally in a work that reminds of a tree trunk slice.

Our bodies are confined, our sense of self is wrapped in skin, we understand our body as an integral whole, hardly aware that we breach the borders of this wholeness every day, absorbing foreign matters into our bodies, literally incorporating them, simply because we need to eat to stay alive. It should not be a surprise then, that eating has such spiritual and ritualistic significance in many cultures.

In the video work “dadduckdead” from 2016, Spierenburg takes a spin on this notion by eating the beak of a plaster duck. This work stems from a dream that Spierenburg had, in which her father ate a duck’s beak. Now the duck returns in a new work, ‘Revisiting the father’. The duck lies in a transport box, on white tiles that have been carefully placed on a piece of faux fur plushy fabric. Dead, as if it were ever alive, it presents as a relic, or a mere remnant of a ritual. Once ‘activated’ in a performance captured on video, it found its ‘forever home’ in a curiously domestic wooden transport box.

Perhaps the most surreal work in the exhibition, it is only one of the three transport box sculptures on display. The other sculptures, no less intriguing, continue the corpo-religious essence found in ‘Revisiting the father’. In ‘Stillness and the things that were swallowed by the earth’ we see an arm in the white-tiled chest. The arm is inspired by medieval reliquaries, that would hold a saint’s arm bones. The oval-shaped cavity in the arm, where in reliquaries a little window would be placed through which devout believers could worship the relics, is filled with beeswax.

Of the shape in the third box, with the flesh coloured tiles, Spierenburg says:

“stones of such a shape I saw in a Chinese temple, where they were hung in a scaffolding, to be broken (I assume during a ritual/ceremony). The previously broken stones were laid out on the floor, reassembled as they once were. Apart from the shape and traces of the unknown ritual, I liked the fact that the broken pieces were kept and cherished, not thrown away as if they were worth nothing after breaking. Likewise, I work with the stuff I break in my performative videos, (unconsciously) using the rule that what is broken during an important action must be preserved”.

The plaster duck is another one of such a preserved object, as is the arm.

The boxes, or transport crates, provide a boundary for each object, as well as its own ‘architecture’. Moreover, they suggest temporality or movability, important ideas in Spierenburg’s work. The object finds stillness and comfort in their ‘shrines’ while being reconnected with a more mundane and industrious everyday life.

In and out’, ‘alive and dead’, ‘still and activated’; we are constantly tossed back and forth between extremes that appear in pairs. The dualism that the phenomenologists wanted to overcome may very well be ingrained in our being. Our attempts to get a grip on our being in the world is like holding a fish to avoid sinking. That’s fine, as long as we find beauty in the tragedy.

Eva Spierenburg (born 1987, Lelystad, the Netherlands, works in Utrecht) studied at the HKU in Utrecht and the Rijksakademie voor Beelende Kunsten in Amsterdam (2015-2016). Her work has been exhibited at, amongst others: Centraal Museum, Utrecht (solo, 2019); CEAC, Xiamen (solo, 2019);  AMNUA Museum, Nanjing (2018); Garage Rotterdam (2017); Royal Palace, Amsterdam (Royal award for painting, 2012-13-14-15). In 2018 Spierenburg received the KF Hein Award. She teaches at the ARTez University for the Arts in Zwolle, the Netherlands.