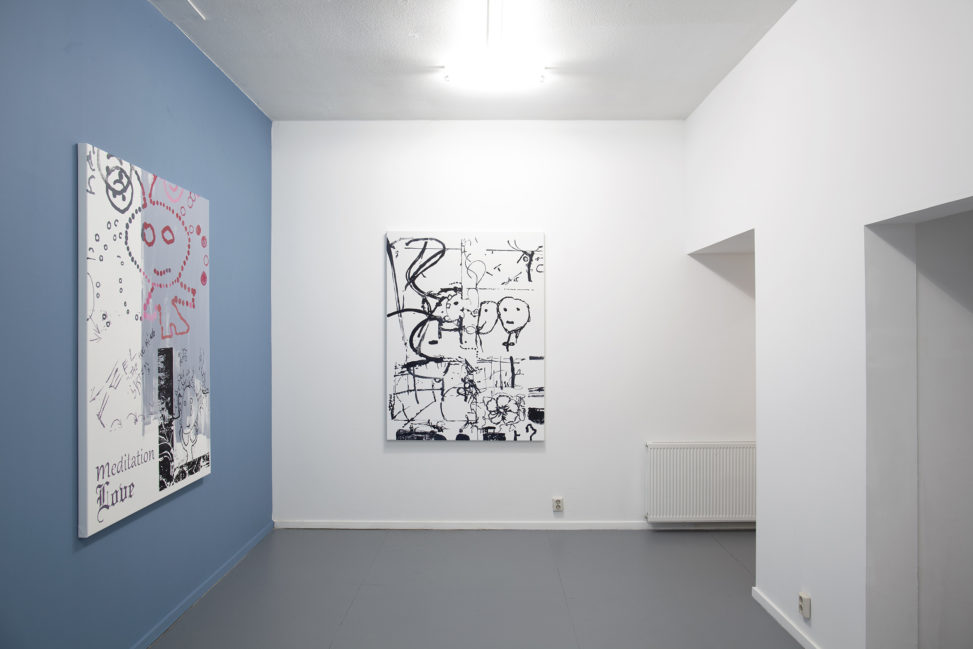 The new works by Yannick Val Gesto are more personal than ever. Val Gesto became known for his work on internet culture, in which he appropriated and reworked deviant art and game aesthetics. As data anthropologist of sorts, he roamed the internet for material, with a special preference for game culture, memes and ‘deviant art’ found on forums and message boards. Many of his works are a testimony to the richness of internet culture, the radical democracy –or anarchy– of the medium, full of rough diamonds, and its non-hierarchical amalgam of creative expressions.

Val Gesto’s work has always been characterized by both information overload, and a desire for simplicity. The net’s rich content has a dark side: digital obesity. FOMO (Fear of Missing Out), too much of a good thing. A Digital Detox is required: dealing with the overwhelming flood of visual information sometimes requires a radical intervention.

Val Gesto is increasingly focusing on this line in his work. In his words: “Away from FOMO, away from fixations, away from information overload.” Also: away from the internet-based source material. The drawings that form the basis of his new work –paintings!– were made on a whiteboard in a homely environment – in Val Gesto’s own home. It doesn’t get much more personal.

Our home, where little things matter, our intimate living environment, its walls and roof protecting us from the world out there. But it is also where we can observe the world online 24/7. The domestic life of cooking, chatting and making coffee, boredom and minor irritations, Google and Netflix. A whiteboard on the kitchen wall – shopping lists, last year’s holiday photos clamped on it with magnets. The genesis of Val Gesto’s new works.

Val Gesto drew simple doodles on his whiteboard, unpretentious, at random moments during the day or evening. Made in the moment, ready to be wiped out as easily as they came to be. The charm of a clumsy, quasi-amateurish “outsider” aesthetic that we know from Val Gesto’s deviant art appropriations is still present, albeit coupled with a much more personal touch.

He then photographed the drawings (simply, with a mobile phone) and digitally reworked them, giving them a raw, graphic quality that is reminiscent of the xerox aesthetic of old DIY fanzines. Lifted out of their fleeting existence, Val Gesto took it upon himself to manually transfer his designs to the canvas. For the first time in his career, Val Gesto turned to painting as his medium of choice.

This experiment towards painting marks a desire for authenticity. There is no faking it. Unlike digital work, in painting the steps cannot really be reversed. All traces are visible, ‘whiting out’ an element on a painting does not produce the same result. With these works, Val Gesto dares to be vulnerable.

‘Meditation, Love’. ‘Fixated mind creates a prison box’. There is a therapeutic theme running through these works as if the artist invites us to join him in a meditation group session. Or laughing therapy. There is a sense of reconnecting to the ‘real’, but it is not without friction. the wilfully naive happiness that Val Gesto seeks to express seems to disintegrate on the canvas. The figures are happy, but unsophisticated, tough and fragile at the same time. Val Gesto paints humanity’s current state: playground on the remnants of a digital disaster. The personal is, sometimes, very universal indeed.